Dr. Jack Hawkins, Jr. called Rosa Parks "the essence of leadership" during a rally supporting the designation of Dec. 1 as Rosa Parks Day in Alabama.

Leaders from state government, higher education and the religious community gathered in Alabama House Chambers on Tuesday to voice support for bills introduced by state legislators Rep. Laura Hall and Sen. Vivian Figures. If passed, Alabama would become one of only four states to designate holidays in honor of Rosa Parks. The holiday would also be the first in Alabama to honor a woman.

“As we came to know Mrs. Parks, I found her to be the essence of leadership because she believed in the unity of all people,” Dr. Hawkins said. “Real leadership is not about dividing people. Real leadership is about pulling people together. Mrs. Parks understood that and carried that out throughout her life.”

Troy University has played an active role in honoring the legacy of Parks via the Rosa Parks Museum at the University’s Montgomery Campus. Opened Dec. 1, 2000, 45 years to the day of Mrs. Parks’ historic arrest, the Rosa Parks Museum tells the story of the woman known as the “Mother of the Civil Rights Movement” and the Montgomery Bus Boycott to thousands of visitors each year.

“What a remarkable day and time this is,” Dr. Hawkins said. “In this very city, we saw the modern Civil Rights Movement born as Mrs. Parks stood up by sitting down on Dec. 1, 1955. Forty-five years later, we were very pleased as a University to open the Rosa Parks Museum to honor her legacy. Please know that Troy University supports the designation and dedication of Rosa Parks Day, and we would love to see that celebrated on Dec. 1 every year. May God bless her memory.”

“Long before this day, Troy University recognized Mrs. Rosa Parks with the Rosa Parks Museum thanks to Mr. Lamar Higgins, who is on our Board of Trustees, and Chancellor Hawkins,” Dial said. “We realized the importance of Mrs. Parks’ impact on this community, this state and this nation. The Rosa Parks Museum is one of the most beautiful attractions in the state of Alabama and provides thousands upon thousands of visitors the opportunity to learn about the sacrifice Mrs. Parks made, and we are proud that this action will continue to recognize her legacy.”

“She was so very humble and meek and mild, but she did such great things for all of us,” Figures said. “We all stand on her shoulders today. It is such an honor to be able to introduce this bill in the Senate, and we look forward to being able to celebrate the first Rosa Parks Day on Dec. 1, 2018.”

The Rev. Farrell Duncombe, Jr., pastor of St. Paul African Methodist Episcopal Church, 9th District AME Bishop Harry L. Seawright and Wayne Reynolds, chairman of the Global Institute for Freedom and Justice, also made comments during the rally, which was originally planned for the State House steps but was forced inside due to rain. 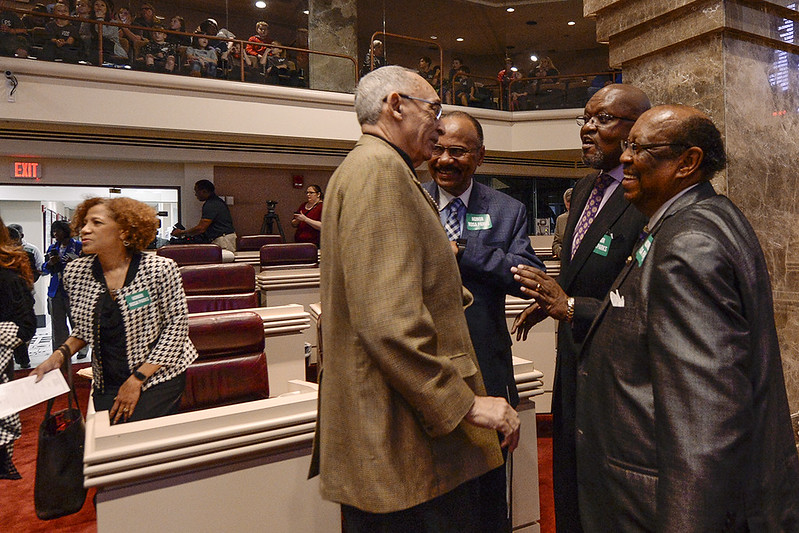 Great to have everyone back for 2023!

First day of the spring semester! Welcome back!