Members of the ATO "Walk Hard" team arrive at Pier Park in Panama City Beach following a 130-mile walk from the Troy Campus.

Joining hands and breaking into song, the fraternity members celebrated the end of their six-day Walk Hard for Heroes journey from Troy with friends and family members who gathered at the pier to support them.

This was the ninth Walk Hard and, by a wide margin, the most successful, as the walkers raised $43,000 for Jeep Sullivan’s Wounded Warrior Outdoor Adventures, a local nonprofit organization that takes wounded veterans on hunting, fishing and other outdoor bonding trips.

That dollar amount marks the highest in the event’s history.

“It went great and was everything we could have dreamed for,” said Dash Merritt, a TROY senior and the director of the walk. “We had perfect weather for these guys, we received great hospitality, but the biggest thing is reaching that goal. We set a $40,000 goal, double our goal last year, and to not only reach that goal but exceed it and write a $43,000 check, that’s encouraging.”

Merritt credited this group of ATO brothers with the success.

“Our guys got after it,” he said. “They’re passionate about it, they know they’re walking for a purpose, and I think outside people saw that. Passion is contagious. Every bit of the money we raise, we see the impact it has on these military men and women.”

Jake Brown, a junior who participated in his first Walk Hard, said the pain he endured during the trip was worth it.

Check out more photos of the team’s arrival: 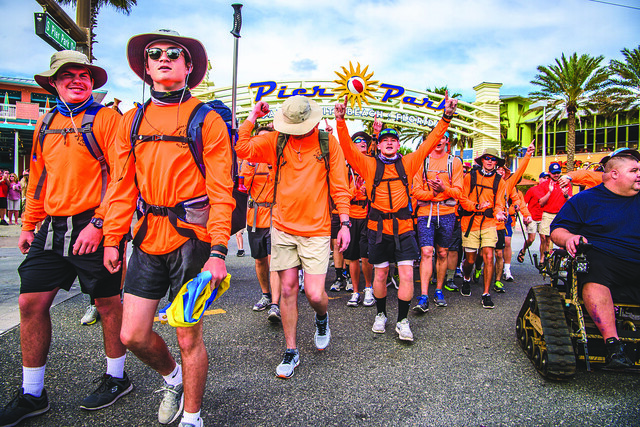 “It’s been heartwarming,” he said. “Every day is tough, but you get to hear such positive words about what you’re doing, and people thank you from the bottom of their hearts. We heard every day and night how thankful they were, and that was cool.”

Still, it was a tough journey.

“For me it was very hard. It was tough,” Brown said. “I was limping like an 80-year-old grandpa. But my brother is in the military and I couldn’t let him down. It’s the hardest thing I’ve ever done for sure.”

The walk encompassed 123 miles and had the biggest group of walkers in the event’s history.