Troy University showed its gratitude to veterans and members of the military Saturday with Military Appreciation Day.

The day featured numerous events at Veterans Memorial Stadium designed to honor the military, including an enlistment ceremony under the direction of Maj. Gen. Sheryl Gordon, who became the first female Adjutant General of the Alabama National Guard in July.

Representatives from each branch of the military led the TROY football team on the Trojan Walk before the game, and pre-game festivities included a flyover by two F-16 fighter jets from the 187th Fighter Wing of the Alabama Air National Guard.

Members of the military were able to attend the Trojans’ game against Akron free of charge.

“To me, it means a lot,” said Senior Airman Jasmine Robinson, an Ozark native. “You’re honoring the people who put their lives on the line and spend time away from their families to support the nation, so it means a lot to see that civilians appreciate us.”

“This was my first time at Troy University, and it is an awesome event,” he said. “It does show an appreciation to all the military branches, and it’s an honor to be here for us as well. It’s important to see a university do this.” 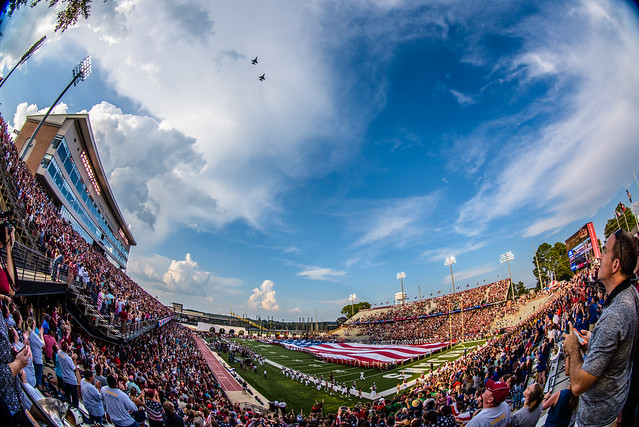 The military branches were also honored between the first and second quarter of the game with the Sound of the South playing their respective service songs.

“It makes me proud to serve my country, because it shows that people recognize us,” said Navy CM3 Brandon Grantham. “We don’t get recognized much, so it’s really good to get support from the folks out here. It can seem like the things we go through on a day-to-day basis may not be appreciated, so it makes morale better overall to see that we are.”

TROY to pay tribute to military during Nov. 12 football game against Army

Born to ride and driven to share the love of the road: Army retiree finds success in business through SBDC support

Alumna nominated for Military Spouse of the Year award

"How to Name your Dragon"- Troy graduate student M

Your dream dorm called— and it wants you to clai