Sitting outside the building that bears his name, former Troy State University Chancellor Dr. Ralph W. Adams can keep a close eye on the campus he led for 25 years.

Troy University officials on Friday unveiled a new statue of Dr. Adams which sits on a bench outside of the Adams Administration Building.

“If I’ve ever known a man of vision, that was Dr. Ralph Adams,” Hawkins said. “Much of what we’ve been able to accomplish over these last 25 years, really the groundwork was laid by Dr. Adams.”

Adams served as chancellor for 25 years, from 1964 to 1989. Under his leadership, then TSU grew into an international university with strong ties to the U.S. military and an expanded focus on serving non-traditional students at campuses and locations outside of Troy.

“More importantly, I think, one of the main things Dr. Adams gave us was the ability and the encouragement to think outside of the box,” Hawkins said.

Adams’ son, Sam Adams, was on hand for the statue’s unveiling. He said his father would be delighted to be memorialized in a place that was so special to him in life.

“This is where he lived, in this area,” Adams said. “He walked back and forth to home every day here, he enjoyed life here …this will continue that memory and we thank you so much for allowing us to be a part of it.”

The statue was designed by Chinese artist Ma Hui.

Click below for a gallery of photos from the dedication: 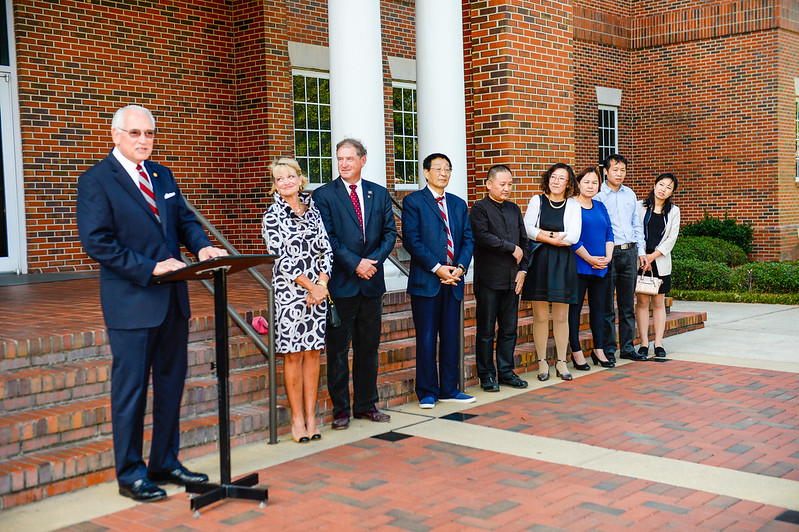 Matt Clower is Senior Director of Communications at Troy University.

Peevy encourages TROY students to do right, serve others and become leaders

It Came from the Archives: Aerial images of Dothan through the years

The sunsets at TROY just hit a little different so

Thank you to those who sacrificed everything for u

Say 👋 to Hamil and Gardner. These dorms will b

We are proud to be leading change every step of th

Changes happening at TROY! We are preparing to re

Another round of congratulations to the nearly 1,0