Summer commencement is set for Friday, July 23 in Trojan Arena.

The event, which will not require tickets, will begin at 10 a.m. No COVID-related restrictions are in place.

Some 520 students from 24 U.S. states and eight countries outside the United States are expected to participate in this summer’s exercises.

General Marshall is the state’s 48th attorney general, having been appointed to the position in 2017 by then-Gov. Robert Bentley. Prior to his appointment, he served as Marshall County District Attorney since 2001.

As district attorney, Marshall helped draft and pass the Brody Act—a law that makes it a homicide to kill an unborn child during an attack on the unborn child’s mother. Marshall later became the first prosecutor to secure a death sentence under the Brody Act (in a case where a man murdered his pregnant wife and was charged with the homicide of both her and her unborn child). Five years later, when this landmark case was on appeal to the Alabama Supreme Court, Marshall—now attorney general—had the privilege of defending that conviction.

As attorney general, Marshall has embraced his role as the state’s chief law-enforcement officer and has committed himself to making Alabama a safer place to live. In January 2018, Marshall launched the Initiative on Violent Crime with the mission to “help cities reclaim their streets, restore the rule of law, and . . . see their communities revived.” Since its launch, the initiative has resulted in the arrests of hundreds of violent offenders.

Marshall was recently elected to the executive committee of the Republican Attorneys General Association, a nod to his demonstrated expertise and leadership on a variety of national policy issues including the opioid crisis, illegal immigration, and religious liberty.

He has one daughter, Faith, and attends Church of the Highlands in Montgomery.

Clif Lusk is a University Relations Coordinator at Troy University.

Love of music, bonds formed keep Sound of the South alumni coming back to perform

Holiday Showcase planned by students at the IDEA Bank 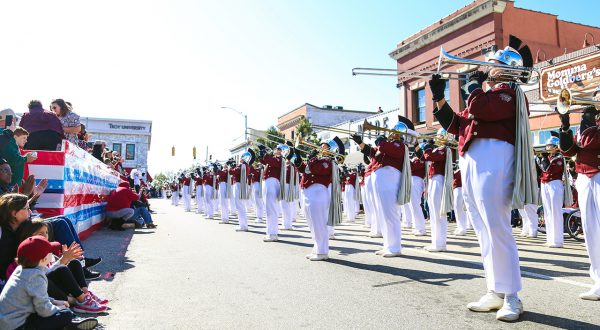 Congrats to this year's Homecoming Queen and King,

So, how about that pep rally last night?? Great a

I'm flying! Day 2 ended with Carnival on the Qua

Day 1 of homecoming week down! Chalk the quad was