The Hall School will officially celebrate 50 years on Dec. 16.

Troy University’s Hall School of Journalism and Communication kicked off the beginning of a yearlong celebration on Friday in honor of its 50th anniversary with the unveiling of a new slogan, student competitions and more.

The new slogan, “Shaping ethical and trustworthy communicators,” was chosen by way of a school-wide contest with the goal of describing the mission and values of the Hall School in five words or less. Out of hundreds of entries, the winning motto was submitted by marketing adjunct faculty member Harvey “Jim” Kerlin II.

Chancellor Dr. Jack Hawkins Jr. said the slogan was reflective of the Hall School’s long history of dedication to the truth.

“As you look back over the history over the Hall School, it is impressive. One of the namesakes of the Hall School, Grover C. Hall, won a Pulitzer Prize for telling the truth about the Ku Klux Klan in 1928. He did that at a great personal risk,” he said. “That same commitment to truth remains our goal—shaping journalists devoted to reporting facts and telling the truth. What we’re doing today is recommitting ourselves to preparing well-qualified communicators who are focused on telling the truth.”

Dr. Larry Blocher, Dean of the College of Communication and Fine Arts, also credited the HSJC’s student, alumni and faculty for contributing to the legacy of the Hall School.

“Excellence in journalism involves communicating accurate information in a meaningful context. It helps us see beyond what we hope to see and provides a basis for informed decision making,” he said. “Building on a 50-year legacy of journalism excellence, our students and faculty in the Hall School of Journalism and Communication continue to receive state, regional and national awards and recognitions. This kind of academic excellence takes inquisitive, engaged students, highly qualified and dedicated faculty and strong administrative support and leadership.”

Currently, over 30 Hall School graduates are working as professional journalists in local markets while others are working as reporters, anchors and producers at The Weather Channel, CNN and The NFL Network, as public relations coordinators and even as vice presidents for news services and other industries.

“The best barometer for what you can do is what you’ve done, and that’s why I’m so proud of the graduates of the Hall School and so proud of each of you for your commitment to excellence and reporting the truth,” Hawkins said. “From the day that I arrived at TROY, I have been convinced that one of our greatest challenges is trying to take the bushel basket off the light that’s here, and to be able to celebrate this school is one of those bright lights. The Hall School graduate is well prepared to step in and do the job and not just be based on theory, but on hands-on experience.”

After the unveiling ceremony, students and guests were invited to attend a “master class” with Meagan Hart Dorsey, a two-time TROY graduate currently serving as the Public Information Officer for Dothan City Schools, followed by lunch and dessert in Wallace Hall for students and faculty and a series of deadline-driven student competitions. The day wrapped up with a reception for “The Art of the Story: A Year Through a Troy Lens,” an exhibit featuring the work of TROY student journalists, at TROY’s international Arts Center.

Multiple Hall School alumni were on campus for the occasion, including both recent graduates and some from within the first 10 years of the school’s inception. Dawn Railey, the first recipient of the annual Sigma Delta Chi journalism scholarship in 1976, and Barbara Harrington, one of two co-recipients of the first Grover C. Hall scholarship, both attended the alumni luncheon sponsored by the Alumni Affairs office and admired how the school has only grown in its success.

Railey grew up going to plays and concerts at TROY and also attended first through six grade at what was then called the Lab School on campus. She also comes from a long history of TROY graduates that featured her grandmother, father, two brothers and a sister and continued with her nieces and nephews.

She initially majored in journalism before switching to marketing and public relations, and she’s remained in the industry in various capacities since graduating in 1982. She’s also been a recognizable figure at football games and alumni events.

“I’ve used my degree, and it’s served me very well. I still think about things in my economics class—it’s funny what sticks with you,” she said. “I’m so passionate about TROY. It’s just always been a part of my life. Any time I can come back to campus, I will.”

If she could give journalism and communication students one piece of advice, Railey said it would be to maintain their ethics and integrity.

“I think the world is missing some of that. So much of what happens in our news right now is based on clicks and viewership because that translates to dollars for advertisers,” she said. “When I grew up, news was news and entertainment was entertainment. Keep your news and your entertainment separate because the world needs that. We need clear communication.

“But I’m really just in awe of these students now, so I don’t really have anything else to offer them. When I started in communications, the day was 8 to 5. Now it’s 24 hours a day, and I am in awe of how they manage that.”

When Harrington stepped onto TROY’s campus, all she knew was that she didn’t want to follow in her family’s footsteps and pursue a degree in education. She went to orientation as an undecided major when she was pulled aside and asked to come out into the hallway.

“I thought I was in trouble,” she recalled, “that maybe I parked somewhere I shouldn’t have or something. I didn’t know what I could have done on the first day!”

The attendant asked her to come down to the Hall School because she qualified for a scholarship opportunity—but only if she declared journalism as her major that day. The scholarship was good for one year with the option to either remain in the journalism program and keep the scholarship or change majors and lose it. By the end of the year, Harrington had discovered a love for journalism and elected to stay in the program.

Harrington went on to work for the Alumni Affairs Office and later worked on editing the TROY Magazine and started the Alumni Notes. After leaving TROY, she went on to work in communications for the Alabama Road Builders Association and later organized the lifestyles section of a Columbus, Mississippi newspaper.

“You don’t know what you might do down the road, but it’s fun to just keep going and trying. It doesn’t matter what you end up doing as long as you enjoy your job,” she said. “You make good connections, and that’s the best thing. You learn it at TROY before you learn it again on the job.”

The Hall School of Journalism and Communication celebrates its official anniversary on Dec. 16, and the school will celebrate all year with more events that conclude with a banquet in the spring.

“As we celebrate the Hall School’s 50-year history, we look toward the future by integrating new technologies and techniques; however, we stand firmly on the Hall School of Journalism’s legacy and tradition of equipping and preparing students for future success,” said Dr. Amanda Diggs, Interim Director of the Hall School. “I’m so proud to be a part of that history.”

History of the Hall School of Journalism and Communication

The Troy State University Department of English began offering journalism as a minor in 1970. On Dec. 16, 1971, the Hall School of Journalism was created in a partnership between TSU President Ralph Adams and Gov. George Wallace. Distinguished author and editor John R. Chamberlain was the school’s founding dean.

In the early 1970s, the academic council approved a journalism major and minor as well as a journalism education minor. Introduction to Radio and Television was the first broadcast course offered, and TSU-TV began producing a 15-minute, student-produced news segment. The same year, 1975, Sigma Delta Chi, Society of Professional Journalists was established.

The broadcasts grew in the 80s with more than 12 classes being offered in broadcast journalism. ‘Nooncast’ and ‘TSU Nightly News’ were also being produced in the TSU-TV studios. The speech department combined with the Hall School of Journalism in 2008 to from the Hall School of Journalism and Communication. Five years later in 2013, the Master of Science Degree program in Strategic Communication, an online professional degree, was formed, and the print journalism major was changed to multimedia journalism to reflect industry changes.

In December 2014, the Radio-Television Digital News Association named TROY’s program sixth in the nation in a survey of the top 20 College Journalism Programs in the country. Most recently as 2018, student journalists began working in the Earl Hutto Television Studio, a newly renovated, professional designed set.

After Chamberlain, Judy Wagon was named acting Dean in 1975 followed by Dean Jim Hall in 1977 and Merrill Bankester in 1981. Dr. Steve Padgett took over the role in 1996 and later become Director two years later when the school became part of a college.

Dr. Amanda Diggs now leads the HSJC as Interim Director after the departure of Dr. Jeff Spurlock, who served as Director from 2014 until Aug. 2021.

Savanah Weed is a University Relations Coordinator at Troy University, 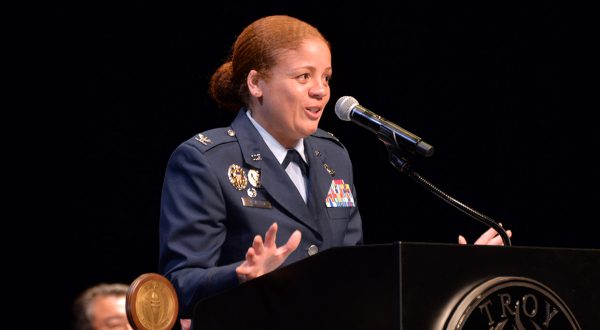 Col. Mentzer encourages graduates to effect change, commit to service to others 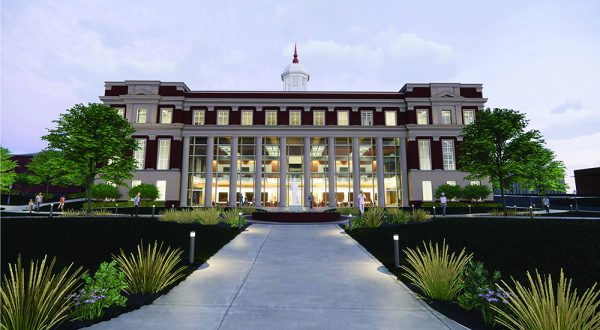 Good morning and welcome to the start of another s

A well-deserved honor for our Chancellor! Chance

Wishing everyone a very Merry Christmas!

We are grateful for you, the worldwide Troy Univer

Spring semester is just around the corner. We can