Troy University students at the Alabama State Capitol in Montgomery during the Higher Education Day Rally.

About 250 Troy University students traveled to the Alabama State House in Montgomery on Feb. 23 to campaign for more university funding in support of Higher Education Day.

Higher Education Day, Montgomery’s largest annual advocacy rally, brings together students from Alabama’s 14 four-year public universities in support of the same goal: to lobby state legislators and policy makers for increased funds to lower the price of getting a college education.

“The state of Alabama has allowed its appropriations to public universities fall to approximately 27 percent of the Education Trust Fund, which is far from the 33 percent in the 1990s,” Gordon Stone, executive director of the Higher Education Partnership (HEP), said.

The day began with a parade from the Cramton Bowl stadium to the front steps of the State House where the rally took place. The Alabama State University and Jacksonville State bands played until Stone began opening remarks and introduced Gov. Robert Bentley to speak.

“Higher education is the place where we develop careers,” Bentley said. “It’s vital to you and your families. We have great universities in this state, and you guys are doing a great job representing your universities. You need to talk to your legislators.” 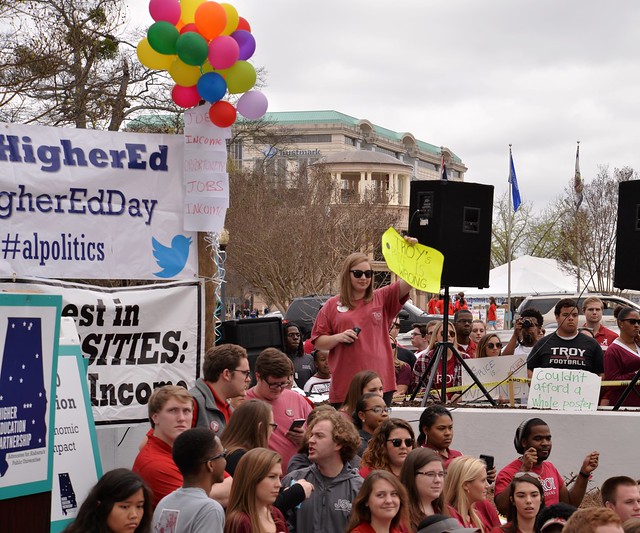 In a crowd of over 1,000 students, chants of “We want one-third” could be heard in between speakers and music throughout the day, along with the waving of signs with sayings such as, “I’m Alabama’s future,” “Students just wanna have f.u.n.d.s,” and “The price is wrong!”

“It’s cool to see more and more students coming out here every year and getting involved,” Max Herman, a senior hospitality management major from Panama City Beach, Florida, said. “I wanted to come to Higher Ed Day because it’s really important. It didn’t seem like it at first, but when you get out here and start trying to basically lobby for more money for the university, that’s really important.”

Dearing said that while a lot of students may hear mention of Higher Ed Day, not many know what it is and how it affects them as an individual.

“Even if we just lowered our tuition a little and got more money from the state, we could use that to make Troy University better,” he said. “This affects you directly because if all of this stuff works, you don’t have to pay as much money to go to school. That’s why it affects every single individual student and why every student should get here and help yell for this great cause.”

At 9 a.m. Thursday morning, three charter buses filled with students pulled away from the Troy University campus to go make their voices heard and campaign for themselves and their classmates.

“The more people that we have here just shows how much we believe in this cause, how much we think that the state should give us more money for higher education,” Dearing said. “I think that because TROY has so many people here, it shows how invested Troy University is in this event.

Ashton Prouty, Higher Ed Day coordinator for the Student Government Association, has attended the event twice and has had the opportunity each year to meet with legislators and hear why higher education is important to them and why it should be to students, also.

“[Higher Ed Day] is something that I think every student at TROY should experience,” she said. “You get to hear about the importance of higher education in Alabama and the need for more funding in our state. It’s an incredible opportunity for students to have a hands-on experience advocating for increased funding for their own education.”

Maj. Gen. Walter Givhan, senior vice chancellor for advancement and economic development, said that legislators can sometimes get distracted by all the big business that’s going on, so it’s important to have high student involvement.

At noon, students were given a free lunch on the south lawn of the Capitol building, and the buses arrived back to campus around 3 p.m. Students who missed class to attend the rally were also given a university excuse.

“Mark it down on your calendars,” Dearing said. “You get a class excuse, you get a free lunch, it’ll be a good time, we’ll take you there and it’s for a great cause.”

College Colors Proclamation Day, another event sponsored by the HEP to advocate for higher education, will be scheduled for later this fall to coincide with the national College Colors Day.

Savanah Weed is a senior journalism major and Foundation Scholar in the Office of University Relations.

It Came from the Archives: Aerial images of Dothan through the years

Out with the old...in with the new. Gardner Hall

Troy University Art and Design seniors had the opp

@official_sots is back holding their Summer Leader

It was great having everyone on campus for session

The sunsets at TROY just hit a little different so

Thank you to those who sacrificed everything for u