This week's Can Castle Contest at the Troy Campus resulted in more than 7,000 food items being collected to address local hunger.

Troy University students collected more than 7,000 food items as the result of the Office of Civic Engagement’s seventh annual Can Castle Contest at the Troy Campus on Wednesday.

Student organizations collected items and then used those items to construct can castles on the patio outside of the Barnes & Noble bookstore.

Students were given 30 minutes to build their can castles to the theme of “One TROY.” The castles were then judged on the structure of the castle, creativity, how well it related to the theme and how well the materials were used. Special prizes were given to the group with the most cans and an overall winner, but many students were happy just to be involved. 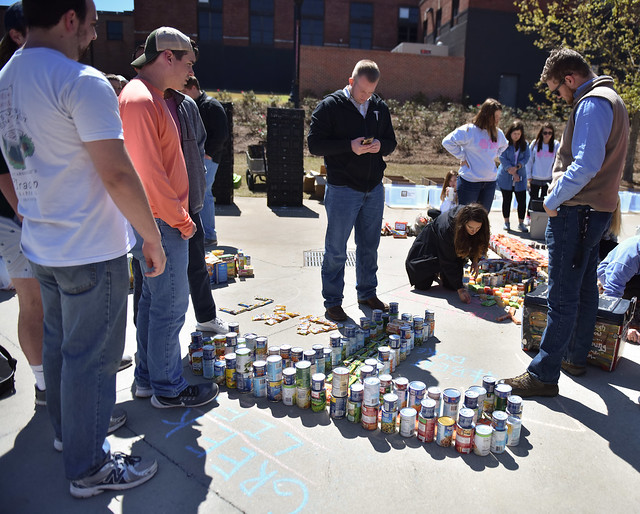 Caroline Belle Chilton, a junior psychology major from Charlotte, North Carolina, and a member of the Phi Mu sorority, said the experience made her feel more connected to the university and to her fellow sorority sisters.

“It’s just a lot of fun,” she said. “I get to meet people and I get to participate. One year one of my sisters brought her grandma to the competition and it was really sweet.”

This year’s participants exceeded the goal set for the event and reached a new high of 7,056 cans of food to be utilized in the Troy area to fight hunger.

In addition to donating food and participating in the event, students from the Hall School of Journalism are also working to develop a campaign for Campus Kitchens.

“For our class, we are coming up with a campaign for Campus Kitchens, how to provide more supplies and food and all that,” Ryan Renfrow, a junior broadcast journalism major from Alabaster, Alabama, said. “We wanted to come out and participate in this as a class project and donate canned goods and try to build a good castle. We know it’s all going to kids and Campus Kitchens, so anything we can do to help out.”

The contest also served as an opportunity to kick start Greek Week, according to Greek Week Director Shelby Miller, a senior risk management and insurance major from Decatur, Alabama.

“Next week we will be starting Greek Week, and we always do the Can Castle event the week prior to Greek Week just as kind of a kick off and it’s a really great way to give to our community before we even start,” she said.

Food items collected for the event will benefit children in the Troy community, but the event also served to raise awareness of the issues of hunger and poverty, said Jonathan Cellon, associate dean of First Year Studies.

“More than 25 percent of Pike County residents and more than 35 percent of children live below the federal poverty line,” Cellon said. “This event raises resources, but it also raises awareness of the issue of hunger in our community. We are appreciative of the groups who participate and support our Campus Kitchens and Backpacks for Kids food assistance programs through this event.”

In addition to the food items collected, the Freshman Forum of the Troy University Student Government Association also presented a check in the amount of $1,269.63 to aid the efforts of the University’s Campus Kitchens program. The funds were donated as a result of Justin Mischler’s successful campaign as TROY’s Hoopcoming King. Mischler, who had designated Campus Kitchens has his philanthropy of choice, was nominated for Hoopcoming King by Alpha Gamma Delta.

Trojans give back during the holiday season

Children from around U.S. enjoy Civic Heroes camp at TROY